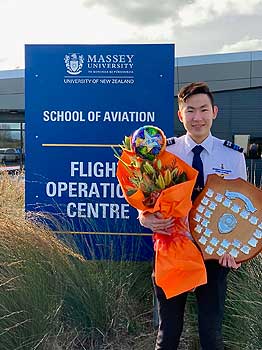 Krittamet Chiewvatsagonchai decided he wanted to be a pilot as a young boy when his father left some model planes next to his bed as he slept.

“They were the first gift I had ever received as a surprise. From then, I just fell in love with planes and aviation and knew I wanted to become a pilot.”

Krittamet followed his dream and is now in his final year of studying a Bachelor of Aviation at Massey University. He recently received his Pilot’s Brevet, known as “Wings”. These are awarded to recipients who have completed a programme of academic and practicum study within a professional pilot training programme.

“Receiving my Wings is a very special accomplishment for me because I have spent years working towards it. I'm very grateful to now have it but there's still a lot for me to do to achieve my dream of becoming a pilot.

During the Wings ceremony, the 20 year old International student was also awarded the Palmerston North Airport Professional Attributes Award. This is presented to the student who has stood out amongst his or her peers as demonstrating a very high level of determination, dedication and a good attitude.  The award came as a great surprise to Krittamet.

“Initially, I wasn't sure if they have actually called out my name because I wasn't expecting to get any award at all. Then I realised it was for me because everyone started looking at me. I felt very delighted because it such an honour to be getting this award.”

Krittamett grew up in Bangkok and later moved to Auckland where he attended high school. He accepted a place in the 2018 intake at Massey’s School of Aviation. Krittamet’s parents had been intending to fly to New Zealand to attend the Wings ceremony, but COVID-19 travel restrictions meant they were unable to. As New Zealand was in Alert Level 2 at the time, the ceremony was limited only to the 17 students from the Massey 70 cohort who received their Wings, as well as their instructors.

“My family ended up watching the ceremony at home through a live stream. They have always been my biggest supporters both emotionally and financially. Flight training can cost a lot especially if you're an international student and my parents worked very hard so that I could have the funds to pursue my dream of becoming a pilot.

Krittamet hopes to become a flight instructor himself at Massey’s School of Aviation before moving on to fulfil his dream of becoming a pilot. While he has concerns about the impact of COVID-19 on the aviation industry, he believes it will bounce back.

“We've seen it in the past where the industry took a hit and came back stronger than ever. I hope once a solution to deal with the pandemic is found, it won’t take the aviation industry too long to take off again.”

In the meantime Krittamet will continue to work hard to complete his Bachelor of Aviation, while making the most of his time in the air.

“There are so many great things about flying a plane. I really like the view, especially when I fly to new places. Getting to see the Marlborough Sounds from the air is very special or having the chance to see the mountain ranges down south up close is pretty amazing. There is also an incredible feeling of satisfaction, especially when you do a manoeuvre perfectly or when you nailed a landing in tough conditions.”